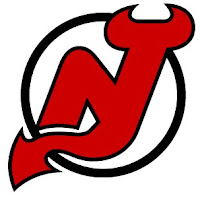 Kyle Palmieri (Notre Dame) scored three goals, including the game-tying marker with 7.4 seconds remaining in regulation, but the New Jersey Devils fell victim to the visiting Tampa Bay Lightning, 7-6, in overtime on Thursday night in an NHL contest at the Prudential Center.

Kevin Shattenkirk (Boston University) had two assists for the Lightning, while Ryan McDonagh (Wisconsin) set up another goal. Alex Killorn (Harvard) tallied a goal for Tampa Bay, which took a 6-5 lead with three consecutive scores in the third period before Palmieri tied the contest.

Happy Halloween!
Posted by RJU at 11:35 AM No comments:

Gicewicz Out for Season for SLU 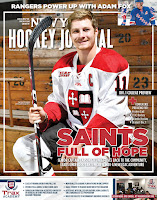 St. Lawrence senior captain Carson Gicewicz announced recently on his social media account that he's out for the remainder of the 2019-20 NCAA campaign, thanks to a torn ACL in his knee. He went scoreless in two season-opening games at Mercyhurst before his condition was diagnosed.

And not even a month after I penned the cover story on him for the October issue of New York Hockey Journal. Now I know how John Madden must feel ...
Posted by RJU at 10:42 PM No comments:

Alaska, UAA Split Round One of Governor's Cup 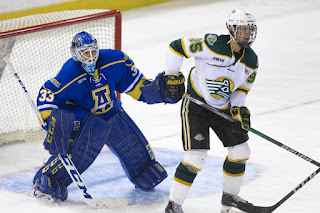 The 2019-20 Alaska Airlines Governor's Cup is all tied up at one win apiece.

The 49th State's two NCAA Division I ice hockey teams split a pair of games at the Seawolf Sports Complex in Anchorage over the weekend, with visiting Alaska (Fairbanks) winning by a 2-1 count on Friday night before host Alaska Anchorage returned the favor on Saturday afternoon with a 4-0 whitewash.

On Friday, Brayden Camrud staked the Seawolves to a 1-0 lead just under 16 minutes into the first period, before Tristan Thompson set up Max Newton for the tying score for UAF 46 seconds before intermission. Thompson's power-play goal midway through the second stanza then put the Nanooks on top for good, as Anton Martinsson made 26 stops in goal for the victory.

On Saturday, Nick Wicks paced the Seawolf offense with two goals and an assist, including the game-winning goal on a second-period power play, while Tomi Hiekkavirta posted three assists. Tanner Schachle and Alex Frye also scored for the Seawolves, and Kristian Stead made 29 saves for the shutout while also backstopping UAA (1-3-0 overall, 1-1-0 WCHA) to its first victory this fall. Martinsson had 22 stops in the rematch for the Nanooks (4-4-0, 2-2-0).

The two games marked the inaugural contests of the first full home slate for UAA Hockey to be played at the sports complex since the 1982-83 campaign. Since then the Seawolves had skated at the 6,200-seat Sullivan Arena in downtown Anchorage, but were forced to move back on-campus this season due to state budget cuts. Plans call for the 700-seat facility to potentially be expanded to as much as 2,500 seats over the next few years.

This season's Governor's Cup will be determined following a two-game set at the Carlson Center in Fairbanks on Feb. 28-29, 2020. A deciding shootout will be utilized if the two schools are subsequently tied with two wins apiece following the second game in Fairbanks.  The Nanooks have claimed the last 10 Governor's Cups.

UAA will now host Nebraska-Omaha for two non-conference games next weekend, including the series opener on Halloween night, while UAF will entertain Bemidji State for a pair of WCHA contests on Friday and Saturday.
Posted by RJU at 10:22 PM No comments: 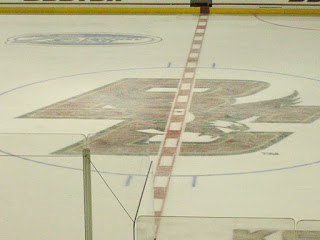 Boston College is off to a good start.

The No. 10 Eagles, who didn't win an out-of-conference contest last season until February, made it 2-for-2 on opening weekend with a 5-3 home victory over Wisconsin on Friday, followed by a 3-0 triumph at Colgate on Sunday.

Freshman goaltender and 2019 first-round NHL draft choice Spencer Knight picked up the win in both games, and recorded his first collegiate shutout with 39 saves at Colgate. He had 23 stops against No. 16 Wisconsin, with two of the goals by the Badgers coming on U-W power plays.

Senior forwards David Cotton and Julius Mattila lead the Eagles in scoring with two goals and four assists apiece so far this season, the first time BC has started off 2-0-0 since last winning the NCAA title in 2011-12.

BC returns to action this weekend with two games at top-ranked Denver.
Posted by RJU at 2:11 PM No comments: 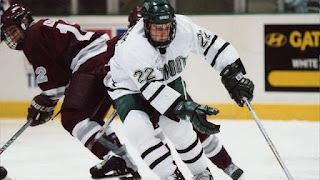 On the eve of the 2019-20 NHL season, a longtime NHL forward and former collegian called it a career.

Lee Stempniak (Dartmouth) announced his retirement on Tuesday after playing 13 full seasons and for 10 teams in the league. A fifth-round draft choice of the St. Louis Blues in 2003 following his sophomore season at Dartmouth, Stempniak, 36, played three seasons with the Blues and also went on to skate for Toronto, Phoenix, Calgary, Pittsburgh, the New York Rangers, Winnipeg, New Jersey, Carolina and Boston.

In 911 career NHL regular-season games, Stempniak scored 203 goals and set up 266 others for 469 points, while adding 327 penalty minutes. He also had three goals and six points in 28 career Stanley Cup Playoff contests. His highest-scoring season as an NHL player was in 2006-07 with St. Louis, when he netted 27 goals and 52 points in 82 outings

A native of West Seneca, N.Y., and a product of the Buffalo Lightning junior hockey club, Stempniak played at Dartmouth from 2001 to 2005, where he notched 63 goals and 88 assists for 151 points for the Big Green in 135 NCAA  appearances. As a junior, he earned First Team All-America accolades, and then was tabbed Second Team All-America as a senior. He was all named All-ECAC Hockey First Team in both of those seasons. As a sophomore, he collected a career-high 21 goals and 49 points.
Posted by RJU at 7:45 AM No comments: