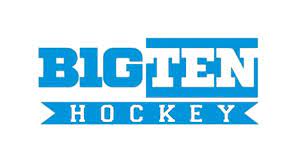 It was quite a weekend for men's hockey in the Big Ten conference.

Ohio State, ranked 17th in NCAA Division I, skated to a split at sixth-ranked Penn State. The host Nittany Lions took a 2-1 decision on Friday, before the visiting Buckeyes rebounded for a 4-3 victory in the series finale.

No. 4 Minnesota swept host No. 13 Michigan State by 5-0 and 6-3 scores. The Golden Gophers have now won six of their last seven games overall, and nine of their last 11 outings.

Wisconsin, last in the Big Ten standings so far this season, still managed a split at fifth-ranked Michigan. The visiting Badgers won by a 6-3 count in the opener before falling, 4-2, in the rematch.

The conference's seventh school, No. 20 Notre Dame, was idle last weekend, and will host Penn Stat this Friday and Saturday. 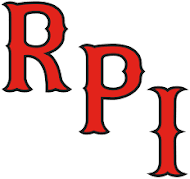 The Boston native was head coach at RPI from 1979 to 1989, and guided the Engineers to the 1985 NCAA Division I men's hockey title. He was relieved of his duties in 1989 after a racial incident with two of his players, and never coached at the college level again.

After one year as general manager with the Notre Dame Hounds of the Saskatchewan Junior Hockey League, Addesa spent five years as a scout with the NHL's Detroit Red Wings. He went on to become general manager/head coach and franchise owner with the Boston Bulldogs junior organization, from 1995 to 2012. He then scouted for the Calgary Flames and Vancouver Canucks, and also served as GM with the Seacoast Spartans Prep organization until retiring in 2017.

Addesa began his hockey coaching career in 1966-67 as an assistant at Stoneham (Mass.) High School, then moved on to St. Mary's (Mass.) High the following season as head coach. He then oversaw Randolph (N.J.) High for five seasons and Wellesley (Mass.) High for one before taking an assistant's job in 1974-75 at his alma mater, the College of the Holy Cross, where he had played football. He was promoted to head coach of the Crusaders in 1976, and remained in Worcester until he took the top job at RPI, where he fashioned an overall record of 186–124–9 over 10 NCAA campaigns.

Addesa was inducted into the Massachusetts High School Hockey Hall of Fame in 2002. 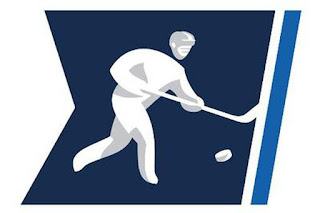 It was quite a Thanksgiving weekend in NCAA Division I men's hockey ...

- No. 9 Harvard (7-1-1 overall) became the last NCAA Division I men's team to suffer a loss this season, a 4-1 setback at No. 5 Michigan on Saturday. The two schools played to a 4-4 tie the night before in Ann Arbor.

- LIU earned its first-ever victory against a ranked opponent with a 3-2 triumph over visiting No. 12 Ohio State on Friday. Former Michigan State forward Adam Goodsir tallied the game-winning goal in the third period, although OSU rebounded for a 4-1 win the next night to salvage a split.

- Speaking of Michigan State, the No. 16 Spartans swept former CCHA foe Miami by 5-3 and 4-0 counts in Oxford, Ohio. Dylan St. Cyr stopped 69 shots on the weekend for MSU, including 39 saves in the shutout victory.

- No. 2 Minnesota and Arizona State split a series at the latter's brand-new Mullet Arena in Tempe. Minnesota won the opener, 3-2, as Logan Cooley set up one goal and then scored the game-winner for the Golden Gophers. The host Sun Devils responded the following evening with a 6-5 victory in overtime as former Boston University forward Robert Mastrosimone connected in the extra session.

- Two teams of Tigers split a non-conference series in Rochester, N.Y. RIT defeated visiting Princeton, 5-3, on Friday as Carter Wilkie scored twice and assisted on another goal for the hosts. Princeton came back the next night to record a 5-0 shutout win behind 23 saves from Ethan Pearson.

- Last but not least, defending NCAA champion Denver (10-4-0 overall) retained the top spot in the DCU/USCHO Division I Men's Poll this week, after a series split with Omaha. The visiting Mavericks won, 3-0, the first night on Jake Kucharski's 22 saves before host DU came back with a 6-3 triumph on Saturday. 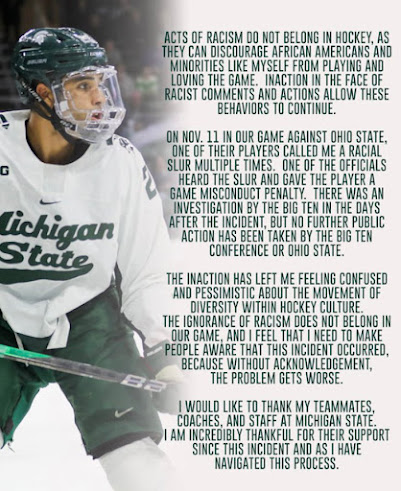 Jagger Joshua (above) is the younger brother of Dakota Joshua, who helped Ohio State to the 2018 NCAA Frozen Four and is now with the NHL's Vancouver Canucks.

The player from Ohio State who received the game misconduct penalty was Kamil Sadlocha. He has not missed any games since the incident took place. OSU and the Big Ten did not issue any supplemental discipline afterwards.

It's hard to believe in this day and age, less than two months from the year 2023, that incidents like this still persist. There's no place for this type of action in hockey, NCAA or otherwise.

ADDENDUM: Sadlocha is currently not playing or practicing with the Buckeyes.

Defending NCAA champion Denver returns to the top spot it occupied earlier this year, while Michigan State has cracked the top 20 for the first time in several years. 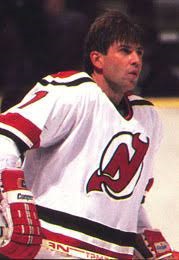 Longtime NHL player and color commentator Peter McNab (Denver) passed away on Sunday at the age of 70 after battling cancer.

Born in Vancouver, McNab was selected 85th overall in the 1972 NHL Amateur Draft, and went on to a 14-year NHL career with Buffalo, Boston, Vancouver and New Jersey in which he scored 363 regular-season goals before retiring in 1987.

A 6-foot-3, 205-pound forward, McNab played three NCAA seasons at DU (1971-1973), registering 78-92—170 points in 105 appearances. In his third and final season with the Pioneers, he collected a career-best 32-40—72 points in 38 outings and led DU to a third-place finish at the NCAA championship in Boston. He turned pro the following season and recorded 34-39—73 points with Cincinnati (AHL) in his lone minor-league campaign, while also making his NHL debut with Buffalo. He later represented the United States at the 1986 World Championships in the then-Soviet Union.

McNab, the son of the late NHL player/executive Max McNab and the brother of former NHL scout/executive David McNab (Wisconsin), went on to become a color commentator for New Jersey for eight years following his retirement as an active player. He then joined the Colorado Avalanche and was a party to their 1996, 2001 and 2022 Stanley Cup championships. 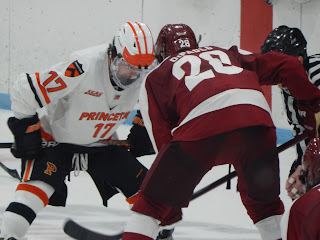 Liam and Brendan Gorman almost made it Princeton's night. Almost.

The two brothers from Arlington, Mass. staked the Tigers to a 3-2 lead with their individual goals at Hobey Baker Rink on Saturday night, but in the end it was the visiting Colgate Raiders escaping with a 4-3 NCAA victory in overtime.

Ross Mitton took a drop pass just inside the Princeton blueline, skated between the faceoff circles, and wristed a shot through Tigers netminder Aidan Porter just 57 seconds into the 3-on-3 extra session to give Colgate its first and only lead of the evening. Porter finished the game with 22 stops.

Liam Gorman opened the scoring when he stole the puck along the right wing boards just over five-and-a-half minutes into the contest, and skated in alone to beat Colgate netminder Carter Gylander (33 saves). Colgate's Nic Belpedio responded nine minutes later with a power-play tally to close out the opening stanza.

Jack Cronin connected on the power play for Princeton for the only goal of the middle session, before Colgate knotted matters once again on Colton Young's power-play goal two-and-a-half minutes into the third period. It was a five-minute man advantage for the Raiders, after the Tigers' Nick Seitz received a major penalty and a game misconduct for hitting from behind only 20 seconds into the final frame.

Brendan Gorman whipped home a shot from the right circle just under six minutes into the third period to again put Princeton (0-3-0 overall, 0-3-0 ECAC Hockey) up by a goal. Simon Labelle replied just under seven minutes later for Colgate (3-6-1, 1-1-0) off a goalmouth scramble to make it 3-3 and ultimately push the contest into sudden death.

Princeton outshot Colgate, 36-26, on the night and finished 1-for-2 on the power play, while the Raiders went 2-for-7 while a man up. The two schools will meet again in January at Colgate to close out their season series.