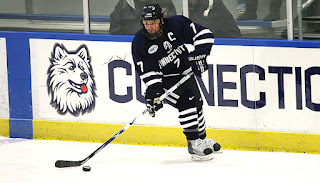 The University of Connecticut men's hockey team will be making the jump from Atlantic Hockey to Hockey East for the 2014-15 season. The long-rumored move was announced last week at USCHO.com, and a welcome celebration will be held in Hartford on Friday.

"This is a historic day in the history of the University of Connecticut and its Division of Athletics," said UConn Director of Athletics Warde Manuel at UConnHuskies.com. "Hockey East is the premier men's ice hockey conference in the country and we are proud to say that the Huskies are now part of it."

Hockey East has won four of the last five NCAA men's hockey Division I national titles, with Boston College winning three of those, including this year. Boston University won in 2009.

The Huskies will now offer 18 scholarships, and will face-off regularly with a number of New England rivals from BC and BU to Maine, Merrimack and UMass-Lowell. Since joining Atlantic Hockey/MAAC in 1998-99 when it transitioned to the Division I level, UConn's New England foes have included American International, Bentley, Holy Cross and Sacred Heart. The program first began play in 1960-61.

With the change in leagues will also come a change of venue, of sorts. UConn will still play it's home non-conference schedule on campus in Storrs, Conn., at the soon-to-be revamped Freitas Ice Forum; but Hockey East conference game swill be contested 25 miles away in Hartford at the 15,635-seat XL Center, current home of the Connecticut Whale (AHL) and former home of the NHL's Hartford Whalers, who moved to Carolina in 1997.