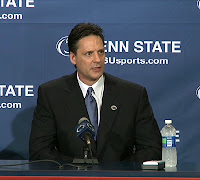 Guy Gadowsky, head coach of the Penn State University men's ice hockey team that will begin Division I play this fall, issued a statement on Tuesday regarding the NCAA's sanctions of the Nittany Lion football program.

Those penalties, which were levied for administrators covering up a child sexual abuse scandal that lasted over a decade, included a fine of $60 million, cuts in the total number of football scholarships over the next four years, no bowl/playoff games for the next four years, and the vacating of more than 100 of the program's overall victories from 1998 to 2011.

"I am motivated by the professionalism and positive nature in which (Penn State) Football Coach Bill O'Brien is dealing with the recent NCAA ruling," said Gadowsky, who previously coached at both Alaska Fairbanks and Princeton. "Penn State Hockey stands behind Coach O'Brien, our great University and the best student body in the nation. We are excited to move forward together to build a better Penn State. "

The full text of Gadowsky's statement can be found here at Penn State's athletic web site.

The Nittany Lions will begin their first NCAA Division I hockey campaign on Oct. 12-13 at home against American International College, with the second game to be played in Wilkes-Barre, Pa.
Posted by RJU at 9:37 PM No comments:

More Out the Door 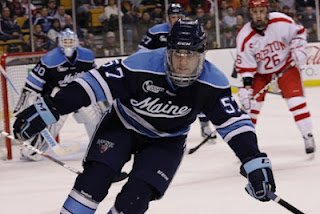 Here's a sampling of NCAA players, in alphabetical order, who won't be back for 2012-13, along with their positions, academic year they were headed into, and NHL organization they have signed with since the 2012 NCAA Frozen Four was held in April:

* Has not yet signed a contract
# Traded to Boston Bruins

There'll undoubtedly be at least several more before the puck drops in October.

Two Say No to College Ranks 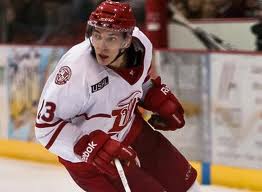 Mark Carlson played hockey in college, but won't be coaching there (again). Zemgus Girgensons (above) didn't even get on the ice.

Carlson, a former UMass Lowell skater and assistant coach who has spent the past 13 seasons as head coach and general manager with Cedar Rapids (USHL), has turned down the opportunity to become head coach at Massachusetts, according to USCHO.com. He led the RoughRiders to a Clark Cup title as USHL playoff champions in 2004-05, and Anderson Cups in 2004-05 and 2010-11 as USHL regular-season champions.  He was also named USHL Coach of the Year both of those seasons.

Carlson, a New Jersey native, will remain with the RoughRiders, whom he has guided since the 1999-2000 campaign. He follows head coaches Rand Pecknold of Quinnipiac University and Paul Pearl of the College of the Holy Cross, who also recently turned down the UMass job to remain with their current employers. The Minutemen have been seeking a new mentor since long-time bench boss Don "Toot" Cahoon resigned on June 19.

Girgensons, who was to enroll at the University of Vermont this fall, has instead signed a professional contract with the Buffalo Sabres, who drafted him 14th overall last month in the 2012 NHL Entry Draft. The Latvian native played with Dubuque (USHL) the past two years, collecting 45 goals and 59 assists for 104 points in 100 games, along with 115 penalty minutes and a plus-24 plus-minus rating. He helped the also Fighting Saints to the 2011 Clark Cup championship, one year after skating for Green Mountain (Vt.) (EJHL).
Posted by RJU at 10:49 PM No comments: 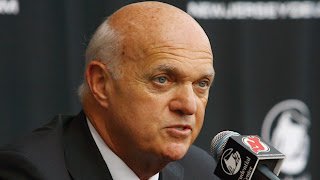 Former Providence College hockey coach and athletic director Lou Lamoriello, who has guided the New Jersey Devils organization for the last quarter-century, was inducted this week into the U.S. Hockey Hall of Fame along with former NHL players Mike Modano and Ed Olczyk. Lamoriello had previously been inducted into the Hockey Hall of Fame in the builders category in 2009.

One of the founding members of the Hockey East Association in 1984-85, he also served as commissioner of the league before joining the Devils, and the Hockey East playoff tournament trophy has borne Lamoriello's name since 1989. Among his many other honors, he was presented with the Lester Patrick Trophy in 1992 for service to hockey in the United States, and is also a member of several other halls of fame in both New England and New Jersey.
Posted by RJU at 12:12 PM No comments:

Parise and Suter Reunited with the Wild 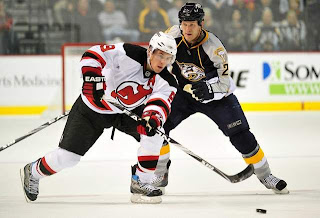 Who says (former) North Dakota Fighting Sioux and Wisconsin Badgers can't get along?

NHL stars Zach Parise, who skated two seasons for the Sioux, and Ryan Suter, who manned the Badger blue line for one year, and were teammates for the U.S. at the 2010 Winter Olympic Games, were reunited again on Independence Day. The highly-sought-after free-agent pair signed separate 13-year, $98 million pacts with the Minnesota Wild on July 4, and will both be leaving the only NHL clubs they have known since entering the league in 2005-06.

Parise, 27, a 5'11, 185-lb. Minneapolis native and the son of a former Minnesota North Star in J.P. Parise, led the New Jersey Devils to the 2012 Eastern Conference championship as captain this spring. He tallied 194 goals and 216 assists for 410 points in 502 career NHL regular-season games, all with the Devils.

In 61 career Stanley Cup Playoff outings with New Jersey, the left-shooting center registered 21-22--43 points, including eight goals and 15 points in 24 games this year as the Devils ultimately fell in six games in the final to the Los Angeles Kings.

"The opportunity to play at home meant a lot to me, and my family," said Parise at wild.nhl.com. "Every kid that's growing up in Minnesota would love to play with the Wild. Now, I'm lucky we were able to make that happen."

"The fact that Minnesota has a lot of good young players, I think will help make this team successful," said Suter, also at the Wild's web site.

The only college season they faced one another was 2003-04, when Suter posted 3-16--19 points for Wisconsin, and Parise collected 23-32--55 points for the WCHA regular-season champion Sioux, as both teams fell in the regionals of the NCAA Tournament, Wisconsin to Maine and North Dakota to Denver.

Further mirroring each other's career, both players spent the 2004-05 NHL lockout in the American Hockey League, Parise with Albany and Suter with Milwaukee, and then were both members of the silver medal-winning U.S squad in Vancouver two years ago. They were earlier teammates at the 2004 World Junior Championships, where they helped the U.S to its first-ever gold medal in that event.

Now they'll again get to share the same stage, this time in the Land of 10,000 Lakes, as they attempt to return the Wild to the Stanley Cup Playoffs for the first time since 2007-08. Minnesota will also visit New Jersey on Nov. 11, and Nashville on Dec. 1 and March 9, in what are likely to be less-than-warm welcomes for the two respective transplants.
Posted by RJU at 9:44 AM No comments: 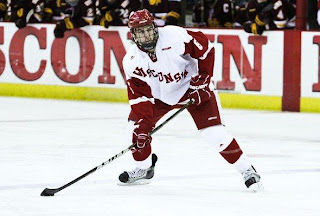 Defenseman Justin Schultz, who earlier bypassed his final year of eligibility at Wisconsin, has signed a free-agent contract with the Edmonton Oilers. The Badgers blueliner from Kelowna, B.C. took advantage of a loophole in the NHL's Collective Bargaining Agreement to bypass Anaheim, which drafted him four years ago, and join the Oilers instead.

Schultz, 21, was chosen 43rd overall by the Ducks in the 2008 NHL Entry Draft, but withdrew from school after the 2011-12 season and then did not sign with Anaheim by June, which made him a free agent.

A two-time All-America selection, All-WCHA choice, WCHA Defensive Player of the Year, and Hobey Baker Award finalist, he led all NCAA Division I college defensmen in overall scoring the past two seasons. He also helped Wisconsin to its most recent NCAA Tournament berth during his freshman campaign.

Schultz is expected to attend training camp in September with the Oilers, who finished 32-40-10 last year and missed the Stanley Cup Playoffs for the sixth straight season.
Posted by RJU at 3:28 PM No comments: