BC, BU Win at Beanpot 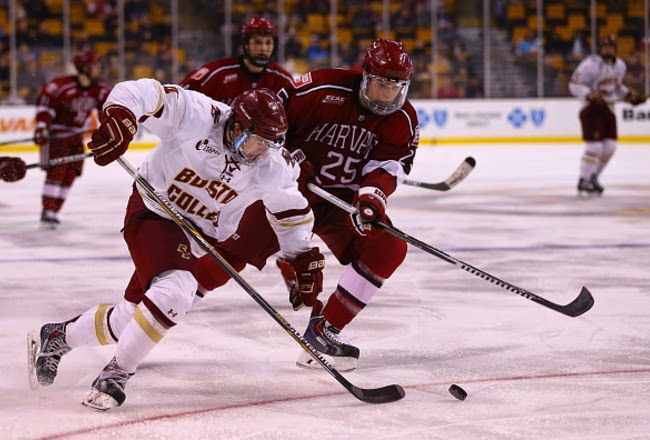 Ryan Fitzgerald's goal 76 seconds into overtime lifted ninth-ranked Boston College to a 3-2 victory over No. 16 Harvard in the Beanpot Tournament consolation game at TD Garden on Monday evening.

BC, which avenged a 6-3 loss to the Crimson back in November, thus remains in the top 10 in the Pairwise Rankings, which are used to used to mimic the 16-team NCAA Tournament selection process, while Harvard dropped into a tie for the 17th spot.

Matthew Gaudreau tied the game for BC at 8:56 of the third period after Harvard had taken a 2-1 lead on goals by Alexander Kerfoot and Sean Malone less than three minutes apart midway through the second stanza, the latter on a power play. Alex Tuch scored the game-opening power play goal in the first period for the Eagles, who got 33 saves from Thatcher Demko.

In the championship contest, Boston University claimed its record 30th Beanpot crown on an overtime power-play tally by Matt Grzelcyk to top Northeastern, 4-3. The goal was Grzelcyk's second of the game, and came just 51 seconds into the extra session for the Terriers.

It was BU's first Beanpot title since 2009, while the Huskies still haven't won one since 1988.

Monday's games had been postponed from their original date of Feb. 9 due to repeated snow that has blanketed Boston area in recent weeks. Northeastern edged BC, 3-2, in the first round on Feb. 2, while BU outlasted Harvard, 4-3, in overtime later that night.
Posted by RJU at 8:42 AM No comments: 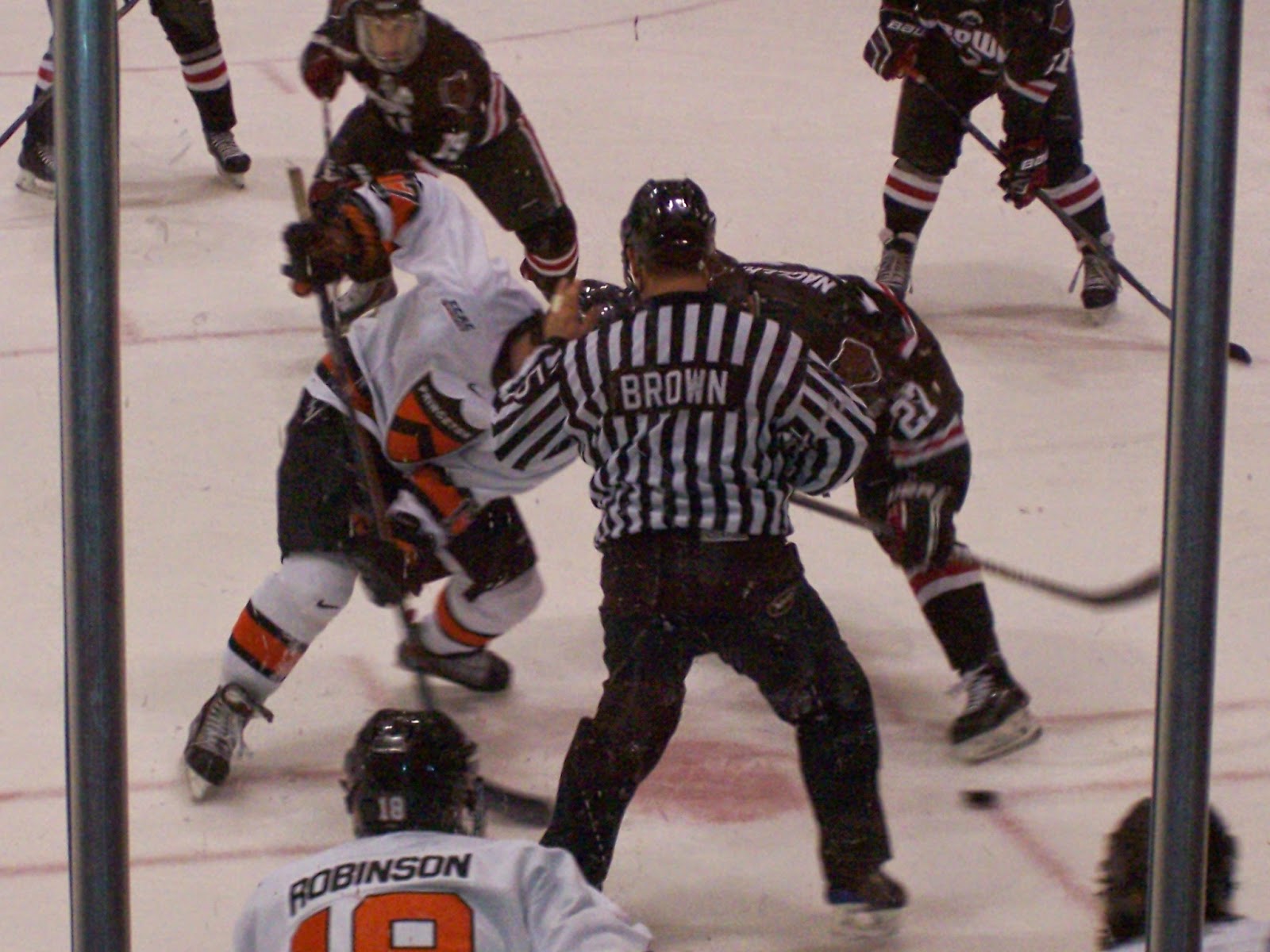 Brown University senior wing  Matt Lorito became the 24th player in school history to record at least 100 career points on Friday night. The Bears’ captain hit the century mark with his assist on Brown’s fourth goal in a 4-1 win at Princeton on Feb. 20. Lorito is now tied for the team scoring lead with eight goals and 18 points in 25 outings this season.

Following a 2-2 tie at Quinnipiac on Saturday, the Bears are unbeaten in their last five outings (4-0-1). Tim Ernst has been the goaltender of record in all five games for Brown, allowing just seven goals in that span. For the season, he has gone 6-5-2 in 16 appearances. 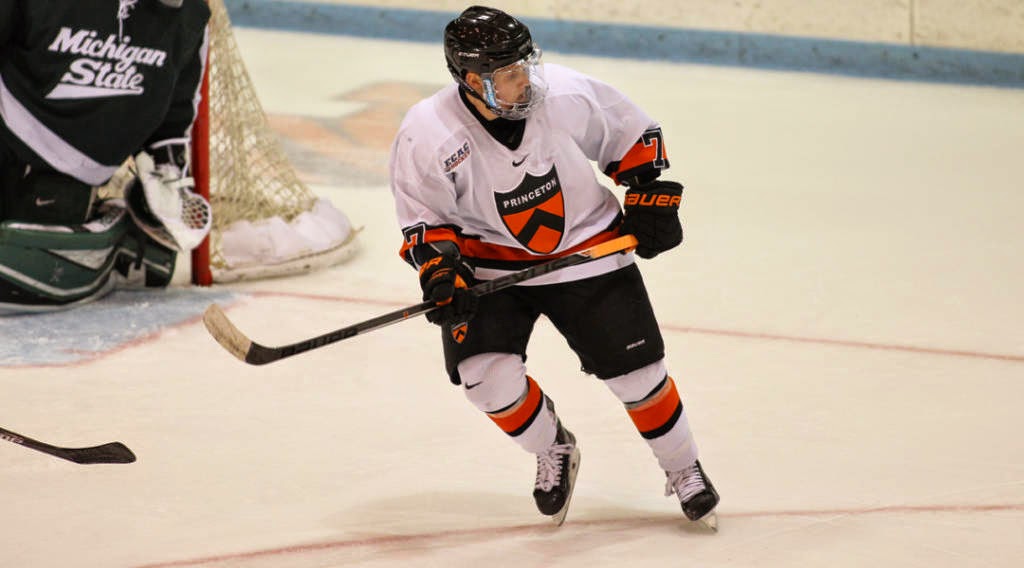 Princeton earned its fourth win of the season, and fourth at home, by besting ECAC rival Clarkson, 2-1, on Friday night at Hobey Baker Rink.

Tucker Brockett notched the game-winner just over seven minutes into the final stanza to make a 28-save effort by Colton Phinney stand up.
Posted by RJU at 11:08 PM No comments:

BC Falls in Women's Beanpot Final 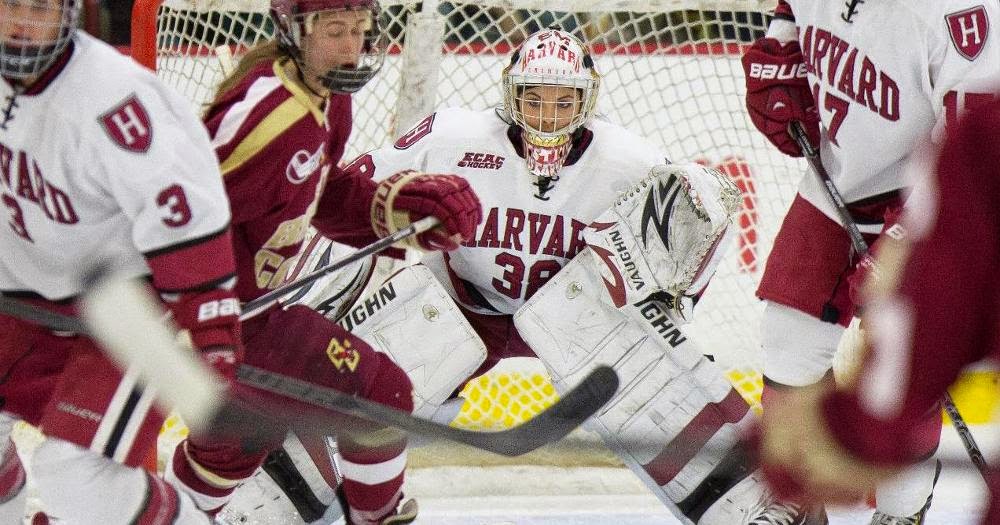 The No. 1 Eagles (27-1-1 overall) dropped a 3-2 decision to Harvard on Tuesday night in the 2015 Beanpot Tournament championship game at Bright Hockey Center in Cambridge.

Miye D'Oench scored the winning goal on a second-period power play for the Crimson (19-4-2), and Emerance Maschmeyer earned Beanpot MVP accolades with a 30-save effort as BC outshot Harvard, 32-17. The loss also prevented BC from winning its third consecutive Beanpot title.

No. 7 Boston University edged Northeastern, 3-1, in the consolation game.
Posted by RJU at 12:04 PM No comments: 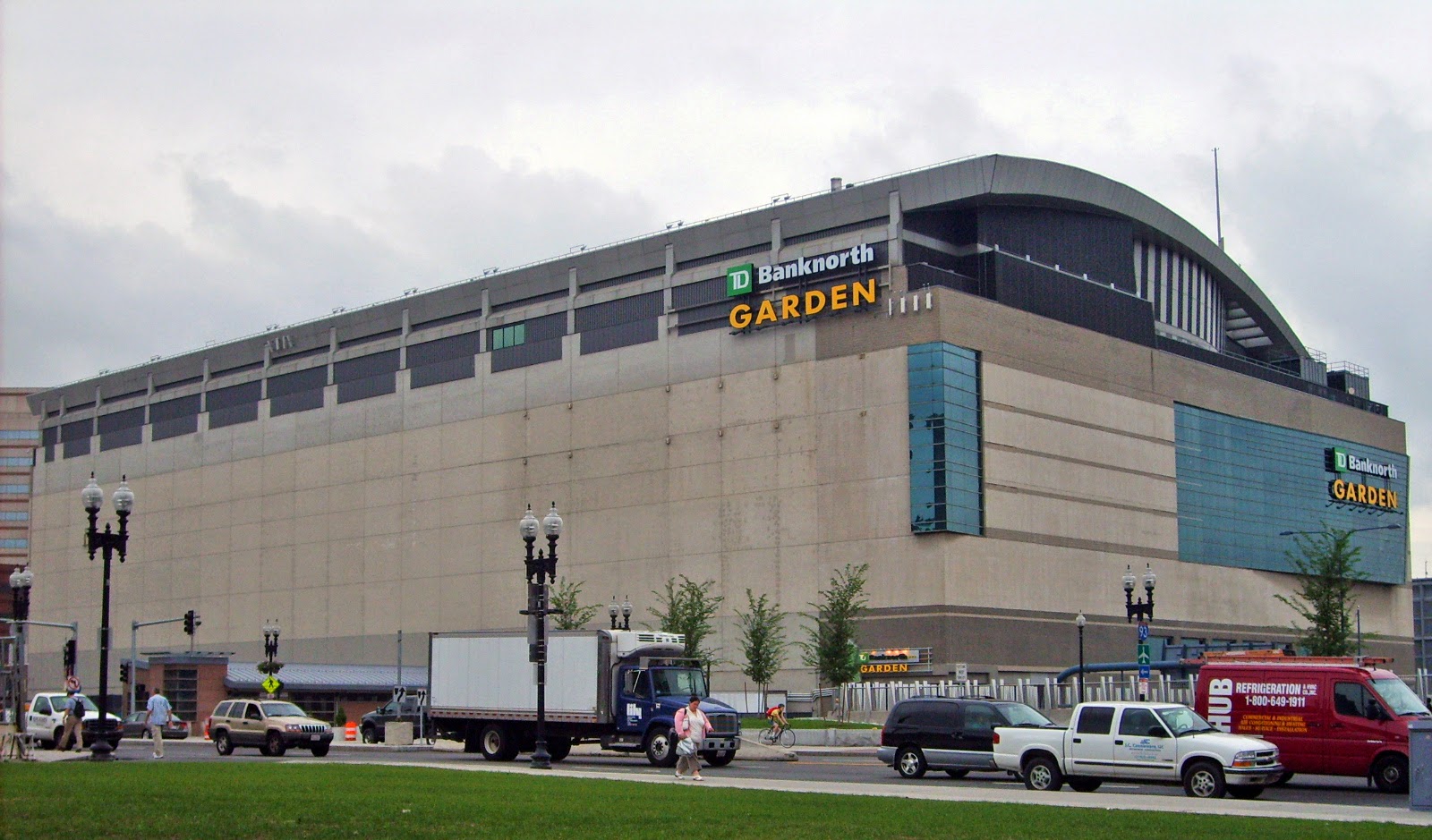 Mother Nature doesn't seem to like college hockey this season, or at least not in New England.

The Beanpot Tournament consolation game and championship scheduled for tonight at TD Garden have been postponed to Feb. 23 due to an(other) snowstorm in the Boston area.

No. 11 Boston College will meet No. 6 Harvard in the consolation in two weeks' time, while No. 3 Boston University and Northeastern will vie for this year's men's title. BU last won in 2009, NU in 1988.

The Women's Beanpot Tournament is still tentatively scheduled for tomorrow at Bright Hockey Center in Cambridge, with No. 6 BU meeting NU in the consolation contest and No. 1 BC facing No. 4 Harvard in the title tilt. BC is seeking its third consecutive Beanpot crown.
Posted by RJU at 9:07 AM No comments: 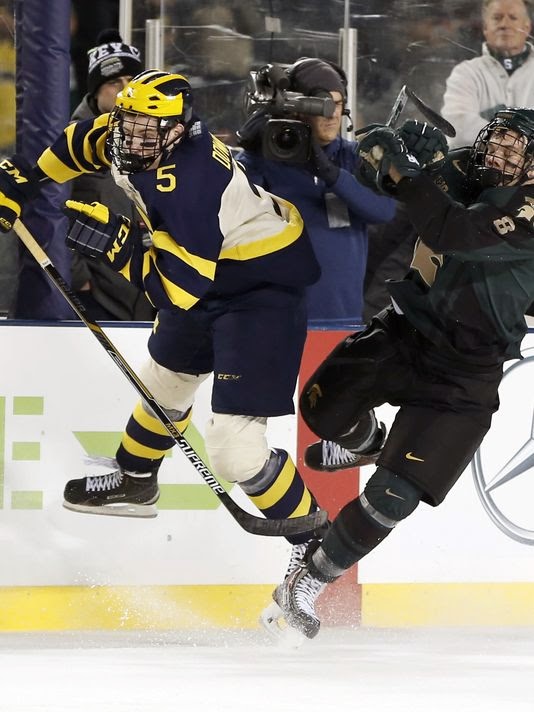 No. 14 Michigan raced out to a  3-0 lead after two periods, and held on to top Big Ten opponent Michigan State, 4-1, at the third annual Hockey City Classic at Soldier Field in Chicago on Saturday night. Face-off was delayed nearly two hours due to weather and ice conditions.

Matt DeBlouw scored MSU's lone goal, while Jake Hildebrand made 33 saves for the Spartans. Michael Downing had a goal and an assist for the Wolverines, who got 31 stops from Zach Nagelvoort.

In the early game at Soldier Field on Saturday, Miami held on to outlast NCHC and former CCHA rival Western Michigan, 4-3, after the Red Hawks skated to a 4-0 lead after 40 minutes. 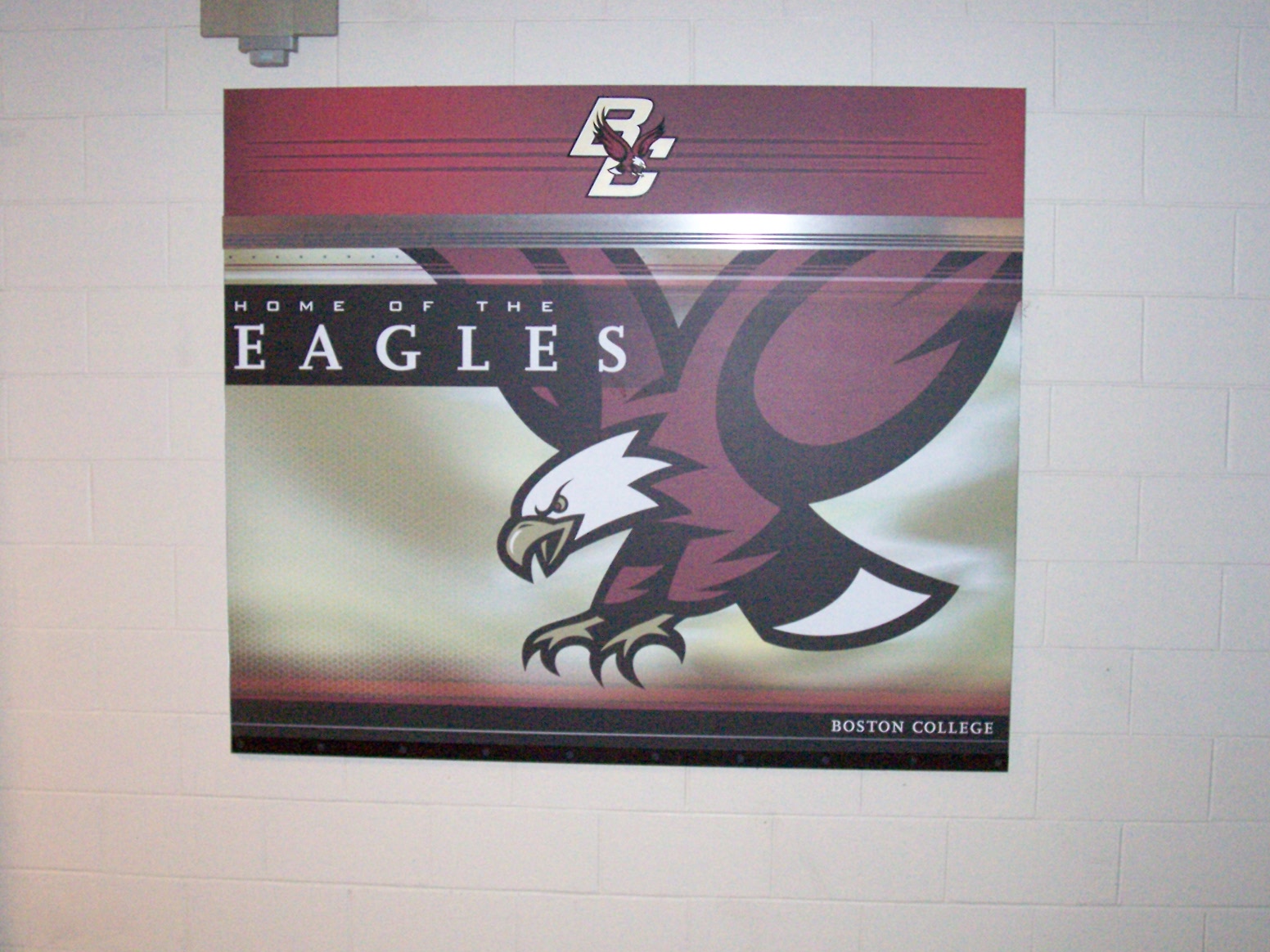 There will be no Beanpot six-pack for the Boston College men's hockey team. Dustin Darou's wrist shot with 1:34 remaining in regulation made it past a screened Thatcher Demko (20 saves) to lift Northeastern to a 3-2 win over No. 11 BC in the second Beanpot Tournament semifinal on Monday night at TD Garden.

The Huskies will make it an all-canine Hockey East contest next Monday night, when they face No. 3 Boston University. The Terriers edged No. 6 Harvard, 4-3, in double overtime in the first semifinal on a Danny O'Regan goal just 2:18 into the second extra session, on BU's 67th shot on goal. BU will be seeking its record 30th Beanpot crown, and first since 2009, while four-time winner Northeastern hasn't celebrated on Causeway Street in February since 1988.

Prior to that, BC, which had won every Beanpot since 2010, will meet Harvard in the consolation game, which could have a major effect on the Pairwise rankings regarding the NCAA Tournament selection. The Crimson and Eagles sit just one spot apart at present, in 11th and 12th place, respectively. Harvard won at BC, 6-3, back in November.

The women's Beanpot will be a reversed field next Tuesday, with No. 1 BC and No. 4 Harvard meeting for the trophy at Bright Hockey Center in Cambridge. BC ousted Northeastern, 3-1, last night, with Haley Skarupa notching the game-winner midway through the third period. The Eagles will seek their third straight title next week against No. 4 Harvard, which blasted No. 6 BU, 9-2, behind two goals apiece from Hillary Crowe and Jessica Parker.
Posted by RJU at 10:01 AM No comments:

Not crazy about New England following Super Bowl XLIX (diehard Seahawks fan since I was 8), but it's Beanpot Tuesday in Boston.

Monday's annual first-round games at TD Garden were postponed by snow. No. 6 Harvard will now face No. 3 Boston University at 5 p.m. this evening, while Northeastern and No. 11 Boston College will follow at 8 p.m. on Causeway Street.

The winners will advance to next Monday's championship game, barring any future inclement weather developments. BC has won the last five men's Beanpot titles.

The 2015 Women's Beanpot also begins tonight at Bright Hockey Center at Harvard with the same interschool matchups. No. 1 BC, the defending champion, will square off with Northeastern at 5 p.m., followed by the No. 4 host Crimson against No. 6 BU at 8 p.m. The victors will advance to next week's title tilt in Cambridge.
Posted by RJU at 11:02 AM No comments: