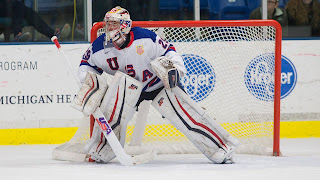 BC forward Colin White scored a goal for the fourth straight game, while BC netminder Joe Woll made 25 saves as Team USA topped host Canada, 3-1, in a round-robin game at the 2017 IIHF World Junior Championship in Toronto.

White lifted the U.S. to a 1-0 lead on a power-play goal in the opening stanza, while Jordan Greenway (Boston University) followed up with another power-play goal that stood up as the game-winner. Greenway also assisted on White's goal and an insurance marker late in the second period by former BC forward Jeremy Bracco. Clayton Keller (Boston University) finished with two assists.

U.S. finished first in Group "B" round-robin play with a 4-0-0 record, outscoring Latvia, Russia, Slovakia and Canada by a 17-6 margin. The Americans will now take on an as-yet-unnamed opponent in the WJC quarterfinal round on Monday.
Posted by RJU at 4:14 PM No comments: 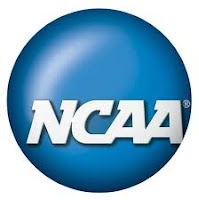 Three of the various NCAA Division I men's ice hockey holiday tournaments are already in the books, with the title game results listed below:

Championship games for three other holiday tourneys will be held on Saturday:

The U.S. National Junior Team made it 3-for-3 in the Group “B" round-robin portion of the 2017 IIHF World Junior Championship with a 3-2 victory over Russia on Thursday afternoon in Toronto.

A tip-in goal by Troy Terry (Denver) in the second period gave the U.S. a 3-1 lead and held up as the game-winner. Clayton Keller (Boston University) staked the Americans to a 1-0 lead on a backhander in the first period, and Colin White (Boston College) put the U.S. up, 2-1, in the second period by putting home a rebound. Terry was named the U.S. Player of the Game, while White has scored a goal in each of USA’s three WJC games this winter, all victories.

Tyler Parson had 25 saves for the Americans, who snapped a three-game WJC losing string to Russia. Team USA will close out the round-robin portion of this year’s tournament against host Canada in Toronto on Saturday at 3:30 p.m. ET (NHL Network).
Posted by RJU at 4:32 PM No comments: 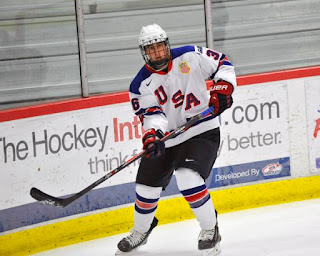 The U.S Junior National Team got goals from five different skaters and improved to 2-0 in the 2017 IIHF World Junior Championship with a 5-2 win over Slovakia on Wednesday night in Toronto.

Colin White (Boston College) scored a goal for the second straight game for the Americans, who also got 18 saves from first-time WJC starter Joe Woll (Boston College). Tanner Laczynski (Ohio State), Tage Thompson (Connecticut), Troy Terry (Denver) and Charlie McAvoy (Boston University) also scored for the U.S., which connected once on the power play and outshot Slovakia, 50-20, on the evening. Jack Roslovic (Miami) posted one assist and was named U.S. Player of the Game, according to usahockey.com.

Team USA will now face Russia (1-1), on Thursday at 3;30 p.m. ET (NHL Network). Russia, which fell to host Canada on Tuesday, has ended American medal hopes in the past three World Juniors.
Posted by RJU at 9:33 PM No comments:

Clayton Keller (Boston University) scored twice and Troy Terry (Denver) and Tage Thompson (Connecticut) had two assists each as the U.S. National Junior Team opened the 2017 IIHF World Junior Championship with a 6-1 victory over Latvia on Monday afternoon in Toronto.

Colin White (Boston College) had a goal and an assist for the NCAA-laden Americans, who also got goals from Jeremy Bracco, Patrick Harper (Boston University) and U.S. player of the game Jordan Greenway (Boston University), plus 11 saves from Tyler Parsons. Team USA, which outshot Latvia, 30-12, en route to scoring the final five goals of the game, will return to action on Wednesday against Slovakia at the Air Canada Centre.
Posted by RJU at 4:31 PM No comments: 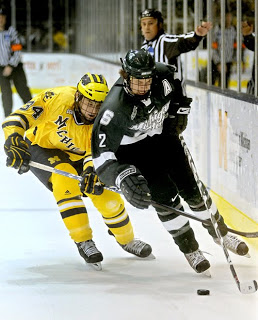 Michigan got upstaged by Michigan State on Tuesday night in Montreal.

Andrew Cogliano (Michigan) scored the game’s first goal for the Anaheim Ducks while extending his consecutive games played streak to 738 NHL games, but it was all Montreal after that. The Canadiens tallied five unanswered goals, two of them by defenseman Jeff Petry (Michigan State),  en route to a 5-0 victory at the Bell Centre.

Petry, from Ann Arbor, Mich. now has seven goals on the season, tying his NHL career high recorded in 2013-14 with the Edmonton Oilers. He collected nine goals in three NCAA seasons at MSU (2007-2010), according to hockeydb.com.


The games played streak by Toronto native Cogliano, who scored 36 goals in two years at Michigan (2005-2007), is the fifth-longest streak in NHL history. He passed current St. Louis Blues blueliner Jay Bouwmeester, who played in 737 consecutive NHL contests from 2002 to 2014 with Florida, Calgary and St. Louis.
Posted by RJU at 4:49 PM No comments: 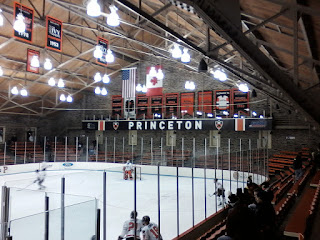 Princeton got goals from six different skaters on Friday night in dismantling No. 19 Minnesota State, 6-1, in NCAA Division I men's hockey action at Hobey Baker Rink.

The two teams face off tonight at 7 p.m. ET to close out the series, and also the 2016 calendar year. Both schools will return to their respective league action on Jan. 6-7.
Posted by RJU at 1:45 PM No comments:

A total of 20 NCAA Division I men's hockey programs will see some of their future players skating in this season's 2017 USHL/NHL Top Prospects Game. The contest, which will feature some of the top players in the United States Hockey League, the sole Tier I Junior "A" circuit in American hockey, will take place on Jan. 10 in Sioux Falls, S.D.

According to USHL.com, 35 of the 40 players selected to participate in this, the fourth iteration of the event, were named to the National Hockey League Central Scouting Preliminary List last month, including three A-rated players in forwards Shane Bowers (Waterloo Black Hawks) and Eeli Tolvanen (Sioux City Musketeers), and goaltender Maksim Zhukov (Green Bay Gamblers). Bowers has committed to Boston University, while Tolvanen has signed with Boston College.

A total of 32 of the 40 players chosen for the game have already committed to NCAA Division I schools. The list of universities with players involved includes BC, BU, Connecticut, Cornell, Denver, Ferris State, Maine, Massachusetts, Michigan State, Minnesota, Minnesota-Duluth, Minnesota State, Northeastern, Notre Dame, Providence, Quinnipiac, Union, Western Michigan, Wisconsin and Yale. BC, BU, Denver and Minnesota-Duluth all boast the most recruits participating, with three apiece.

The full list of participating players is available here.
Posted by RJU at 7:01 PM No comments: 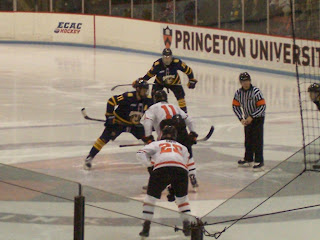 Princeton made it four wins in its last five outings overall as the Tigers defeated No. 7 Quinnipiac, 5-3, on Friday night at Hobey Baker Rink.


Princeton, which took three one-goal leads on the night, went ahead for good with just over four minutes remaining in regulation when an unassisted shot from the blueline by defenseman Matt Nelson found the back of the Quinnipiac net. Eric Robinson then fired an insurance goal into an empty net with 15 seconds left, after Bobcats netminder Chris Truehl (24 saves) had been pulled for an extra attacker. Princeton last won four of five games from Jan. 4-27, 2013.
Max Veronneau set up three of Princeton goals and now has 10 points (4 goals, 6 assists) in his last three games, after starting the season with four points over his first nine contests. Ryan Kuffner, Jackson Cressey (power-play goal) and Alex Riche also scored for the Tigers (4-7-1 overall, 2-6-1 ECAC), who got 33 stops on the evening from Colton Phinney, including a pad save on a shot late in regulation with Quinnipiac threatening to tie the game on a power play.
The Bobcats’ goals came from Kevin Duane (PPG), Landon Smith and Thomas Aldworth, in the first second and third periods, respectively, with each one forging a tie. Quinnipiac (10-6-2, 6-3-1) finished 1-for-5 on the power play while outshooting Princeton, 36-29, overall. The Tigers, who were 1-for-3 with the man advantage, defeated Quinnipiac for the first time since Nov. 23, 2013, a span of four games, and for the first time at home since Jan. 4, 2010.


An altercation after the final whistle resulted in 10-minute misconduct penalties being issued to both teams, and no traditional postgame handshake was held. The two ECAC travel partners will conclude their home-and home series tomorrow at the TD Bank Sports Center in Hamden, Conn.
Posted by RJU at 10:19 PM No comments:

Current NCAA players dominated the preliminary 27-man roster for the U.S. National Junior Team that will compete in the 2017 IIHF World Junior Championship from Dec. 26 to Jan. 5 in Toronto and Montreal.

Boston University had more players (seven) selected than any other Division I school, followed by Boston College with three skaters. Connecticut, Denver, Harvard, Michigan, Minnesota, Minnesota-Duluth, North Dakota, Ohio State, Providence, St. Cloud State and Wisconsin each had one player chosen. There were also four players picked from the Ontario Hockey League, and one apiece from the Western Hockey League and the American Hockey League.

The head coach for the U.S. this year is Bob Motzko (St. Cloud State), while his assistants include Greg Brown (Boston College), Grant Potulny (Minnesota), Kris Mayotte (Providence ) and Steve Miller (Air Force). The full American roster, which will be pared down to 23 players prior to the start of the tournament, can be found here.

The U.S. finished third in last year’s World Juniors in Helsinki, and last won World Junior gold in 2013 in Russia.
Posted by RJU at 7:03 PM No comments: 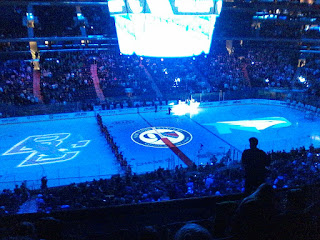 Boston College rebounded from a 2-0 deficit with two goals early in the third period, but couldn't pull out a victory against North Dakota on Saturday night in New York City. The Fighting Hawks held on for a 4-3 win, their first over the Eagles since 2005, in the inaugural College Hockey Showdown at Madison Square Garden.

Following a scoreless first period, Tyson Jost scored twice to put UND up, 2-0, the second goal coming on a power play, after 40 minutes. After a major penalty and game misconduct sustained by UND’s Rhett Gardner late in the second stanza, Colin White got the Eagles to within a goal on a 5-on-3 man advantage  just 49 seconds after the puck dropped to begin began the final frame. Christopher Brown then tied the game for the Eagles by putting home a rebound less than four minutes later.

UND (8-5-3 overall) regained the lead at 9:04 when Joel Janatuinen snapped home a loose puck in the slot, and then Trevor Olsen took advantage of a defensive miscue by BC (12-5-1) to make it 4-2 for the Fighting Hawks with 2:01 left. Matthew Gaudreau’s long-range goal for the Eagles with nine seconds remaining in regulation provided the final margin. Scott Savage assisted on all three BC goals.