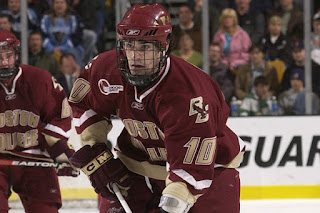 New Jersey Devils forward Brian Boyle (Boston College) has been diagnosed with Acute Myeloid Leukemia, according to NJ.com. He will undergo medical treatment for his condition, and expects to play the upcoming season.

The 6-foot-7 Boyle, who ended last season with the Toronto Maple Leafs after previous NHL stints with the Los Angeles Kings, New York Rangers and Tampa Bay Lightning, has tallied 93 goals and 76 assists for 169 points, and also has 488 penalty minutes, in 624 career NHL regular-season games. He has also posted 15-13—28 points in 106 Stanley Cup Playoff outings, and has twice played in the Stanley Cup Final (2014, 2015). A native of Hingham, Mass., he signed with New Jersey as a free agent this off-season. 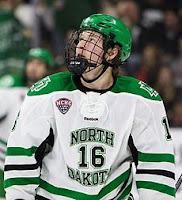 The 2017-18 NHL season got underway, exhibition-wise, on Saturday night as the Vancouver Canucks defeated the host Los Angeles Kings, 4-3, in overtime in the league's preseason opener. Brock Boeser (North Dakota) tallied the game-winner with 22 seconds remaining in the sudden-death session.

Boeser won an NCAA national title as a freshman with North Dakota in 2016. He added two more goals, plus an assist, on Sunday at home as the Canucks fell, 9-4, to the NHL's newest expansion entry, the Vegas Knights, in a game dominated by young players on both rosters.

Alex Tuch (Boston College) tallied Vegas' fifth goal Sunday, on a power play, while Paul Thompson (New Hampshire) closed out the scoring for the Knights late in the third period. Richard Bachman (Colorado College) took the loss in goal for Vancouver, stopping 13 of 18 shots in playing the first 28 minutes. Thatcher Demko (Boston College) mopped up the rest of regulation for the Canucks, and finished with 16 saves on 20 shots.
Posted by RJU at 8:27 PM No comments:

Dumoulin Story Now Up at USCHO.com 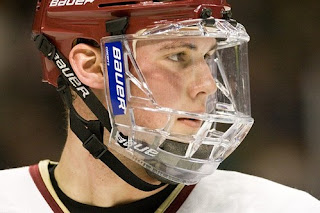 Brian Dumoulin may not be able to win any more NCAA championships — but he might not yet be done claiming Stanley Cups.
A defenseman from Biddeford, Maine, who helped Boston College to two national titles, Dumoulin won his second Stanley Cup in June when his Pittsburgh Penguins outlasted the Nashville Predators in a six-game final.
Read more: http://www.uscho.com/2017/09/12/two-ncaa-crowns-two-stanley-cups-boston-college-alumnus-dumoulin-compiling-impressive-rsum/#ixzz4sis9bkt8
Posted by RJU at 10:36 PM No comments: 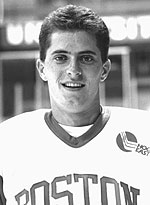 In your prayers and recollections today, please remember Mark Bavis (Boston University '93), who was lost on United #175 on 9/11 on his way to training camp as a scout for the NHL's Los Angeles Kings. He was 31 years old. Rest in peace, Mark.
Posted by RJU at 8:47 AM No comments: 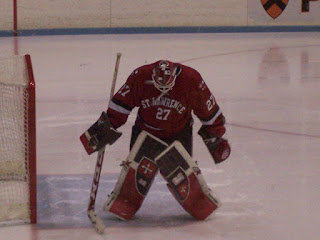 Kyle Hayton's career at St. Lawrence is over. His tenure at Wisconsin is just beginning.


Hayton, who backstopped the Saints the past three years as their No. 1 goaltender, has graduated from SLU with a bachelor's degree, and has been cleared to transfer to Wisconsin where he will now backstop the Badgers while also working on his MBA. St. Lawrence does not offer an MBA program among its graduate academic offerings.


A Denver native, Hayton fashioned a 54-37-13 record over 104 career games at SLU, to go with 13 shutouts, according to USCHO.com. He also complied career a 2.09 goals-against average and a .933 save percentage.


A product of Sioux City (USHL) and Shattuck St. Mary's prior to enrolling at SLU, Hayton earned Second Team All-America accolades as a junior under new SLU head coach Mark Morris, after going 16-12-7 in 35 outings (2.28, .929, 5 SO). He backstopped the Saints to a fourth-place regular-season finish in the ECAC, and played his final game for SLU in a 3-2 loss against Quinnipiac on March 12 in the deciding contest of a best-of-three ECAC Tournament quarterfinal series.


As a freshman in 2014-15, Hayton won 20 games and posted five shutouts, and was named ECAC Rookie of the Year, Second Team All ECAC, and ECAC All-Rookie Team. He also guided the Saints to the ECAC Tournament semifinals in Lake Placid his first two seasons, where they fell by a goal each time.


Hayton, who has not been drafted by an NHL club, is expected to be in net for the Badgers on Oct. 27-28 when the Saints visit Wisconsin for two non-conference contests. The Badgers went 20-15-1 overall last season in their first campaign under head coach Tony Granato. Wisconsin finished second in the Big Ten Conference, qualified for the Big Ten championship game in Detroit, and came within a double-overtime goal of making the NCAA Tournament.
Posted by RJU at 7:23 PM No comments: