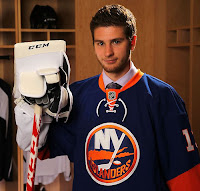 Incoming freshman Eamon McAdam (pictured) and Mike Williamson were chosen by the New York Islanders and Vancouver Canucks, respectively, on June 30 at the 2013 NHL Entry Draft. Goaltender McAdam went in the third round (70th overall), while defenseman Williamson went in the sixth round (175th overall).

Full story at USCHO.com can be found here.
Posted by RJU at 6:24 PM No comments: 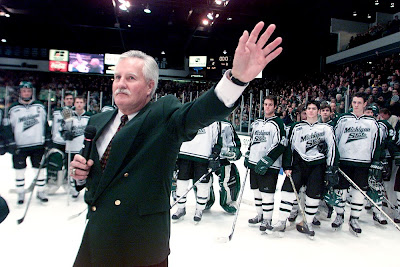 Four of the five inductees into the U.S Hockey Hall of Fame in Eveleth, Minn. this year have strong ties to the college game.

Ron Mason (pictured) won 924 games between 1966 and 2002 as head coach with Lake Superior, Bowling Green and Michigan State, and retired as the NCAA's all-time winningest hockey coach. A former St. Lawrence forward, he also won an NAIA national title with LSSU in 1972 and an NCAA championship with MSU in 1986. He led BGSU to three CCHA titles and three NCAA Tournament berths, and then guided MSU to 10 CCHA crowns and 19 NCAA berths. He then went on to a nearly six-year stint as athletic director with the Spartans, and now serves as a senior advisor to the USHL's Muskegon Lumberjacks.

Former Boston College forward Bill Guerin had 40 goals and 30 assists for 70 points with the Eagles from 1989 to 1990, and helped BC to a Hockey East title and two NCAA Tournament appearances. He then collected 429-427—856 points in 1,263 NHL games between 1992 and 2010 with the New Jersey Devils, Edmonton Oilers, Boston Bruins, Dallas Stars, St. Louis Blues, San Jose Sharks, New York Islanders and Pittsburgh Penguins, according to hockeydb.com. He added 39 goals in 74 points in 140 NHL playoff games, and won Stanley Cups with the Devils (1995) and Penguins (2009). A three-time U.S. Olympian (1998, 2002, 2006), he now works in the Pittsburgh organziation as player development coach.

Former Lake Superior State forward Doug Weight collected 50-94—144 points in two campaigns with the Lakers, while helping them to two NCAA berths and a CCHA championship. He then notched 278-755—1,033 points in 1,238 NHL outings with the New York Rangers, Edmonton, St. Louis, Carolina Hurricanes, Anaheim Ducks and the Islanders from 1991 to 2011. He added 23 goals and 72 points in 97 NHL playoff contests, and won the Stanley Cup with the Hurricanes in 2006. A teammate of Guerin's with Edmonton, the Islanders and the U.S. Olympic Team, he now serves as an assistant coach and a special assistant to the general manager with the Islanders.

Cindy Curley starred at Providence College from 1981 to 1985, where she tallied 110-115—225 points with the Lady Friars. She ranks among PC's top five in all three categories, according to Providence's 2012-13 media guide, and also played in three IIHF World Championships with the U.S., including the inaugural women's tournament in 1990. She has since worked in a number of administrative capacities with USA Hockey.

The fifth and final inductee this year is Peter Karmanos, Jr., owner of the NHL's Hurricanes and OHL's Plymouth Whalers, who has also long sponsored the Compuware youth hockey organization in Michigan.

More on each of the inductees can be found here on the USA Hockey site.
Posted by RJU at 10:37 AM No comments:

Of the 48 NHL players invited to the 2014 U.S Olympic Team Orientation Camp next month, a total of 31 once plied their trade in the college hockey ranks.

The orientation/tryout camp for Team USA will take place the final week of August in Arlington, Va., at the Kettler Capitals IcePlex, practice home of the Washington Capitals. The U.S. won Olympic silver in both 2002 (Salt Lake City) and 2010 (Vancouver) using NHL players.

The complete U.S. Olympic invitational roster can be found here.
Posted by RJU at 4:01 PM No comments:

Western Michigan will have to make do with two less players next year, one a highly-prized incoming recruit and the other a defenseman with two years of NCAA experience, according to USCHO.com.

Michael McCarron, a first-round draft choice (25th overall) of the Montreal Canadians at the 2013 NHL Entry Draft last month, decided to bypass playing in the college ranks to sign a three-year deal with the Habs last week. The 6-foot-5, 228-pound winger from Michigan tallied 14 goals and 34 points with the U.S. National Team Development Program's U-18 squad last season, and will either be assigned to London (OHL) in the major junior ranks, or else start his pro career with Hamilton (AHL).

“Our feeling is our program is on solid footing and we will put someone in the lineup to replace Michael McCarron,” said WMU head coach Andy Murray at mlive.com.

Murray also announced that rising sophomore blueliner Garrett Haar has been released by the WMU hockey program and will no longer play for the Broncos after being ruled academically eligible earlier this year.

“Garrett has not lived up to his commitment to his academics and his Bronco hockey teammates and we have decided to part ways with him,” said Murray in a school news release last week.

Haar, a 6-foot-1, 198-pound California native and a 2011 Washington Capitals draft choice (207th overall) who posted four goals and 17 points in 58 career games with the Broncos, said on Twitter that the decision to leave WMU was all his own. He prepped with Fargo (USHL) before coming to Kalamazoo.

Mike Corbett is the new head hockey coach at the University of Alabama-Huntsville.

The long time Air Force Academy associate/assistant  coach, who also interviewed for the Alaska Anchorage job that eventually went to  Matt Thomas, took over at UAH earlier this week from Kurt Kleinendorst, who resigned after one year in Huntsville to pursue professional coaching opportunities.

A Green Bay native, Corbett earned bachelor’s and master’s degrees from Denver where he played four seasons on the Pioneer blueline (1993-1997) and was a two-time all-conference academic team choice. He then spent four seasons as a junior head coach in the American West Hockey League before returning to the college ranks at AFA in 2003.

Corbett, 41, served as the primary defensive coach during his 10-year tenure at Air Force, and also helped the Falcons to five Atlantic Hockey tournament championships and five NCAA tournament appearances. Those national berths included the East Region final in 2009, where AFA came within an overtime goal of going to the Frozen Four.

UAH begins the 2013-14 campaign, its first in the revamped Western Collegiate Hockey Association, on Oct. 11-12 at Northeastern.
Posted by RJU at 9:04 PM No comments: 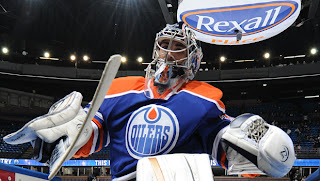 There's already been quite a bit of activity on the NHL free agent front involving former NCAA players, with this year's transaction derby having begun on Friday.

Regarding defensemen, Joe Corvo (Western Michigan) has signed with Ottawa after most recently skating with Carolina, while Mike Komisarek (Michigan) went to Carolina from Toronto. Rob Scuderi (Boston College) has returned to Pittsburgh after winning the Stanley Cup last year in Los Angeles, while former college teammate and 2000 Hobey Baker Memorial Award winner Mike Mottau is off to Florida after playing with Toronto.

Concerning forwards, Viktor Stalberg (Vermont) is going from the current Stanley Cup champion Chicago Blackhawks to Ottawa, while Eric Nystrom (Michigan) will join Nashville after playing in Dallas. Tyler Bozak (Denver) chose to re-sign with Toronto, while Ryan Jones (Miami) re-upped with Edmonton. Dominic Moore (Harvard) will join the New York Rangers from San Jose, while Jack Skille (Wisconsin) will suit up for Columbus after last playing with Florida.

Amongst goaltenders, Yann Danis (Brown) jumped from Edmonton to Philadelphia, while Dan Ellis (Nebraska-Omaha) is headed to Dallas from Carolina. Richard Bachman (Colorado College) will set up shop in Edmonton after getting his NHL start in Dallas, while David Leggio (Clarkson) will look to crack Washington's rotation after leaving Buffalo.

A complete list of NHL free agent signings to date can be found here.
Posted by RJU at 9:59 AM No comments: 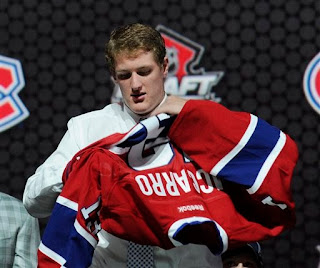 The 6-5, 228-lb. winger is committed to Western Michigan for next season, but his major junior rights are held by London (OHL). He had 11 goals and 29 points along with 166 penalty minutes last season for the U.S. U-18 Team that skates in the United States Hockey League. More on McCarron can be found here.

In all, 63 incoming or current NCAA players were picked by pro clubs on Sunday at "The Rock", home of the NHL's New Jersey Devils, according to USCHO.com. WMU will be part of the new National Collegiate Hockey Conference starting this fall with the likes of Denver, Miami and North Dakota.
Posted by RJU at 3:53 PM No comments: