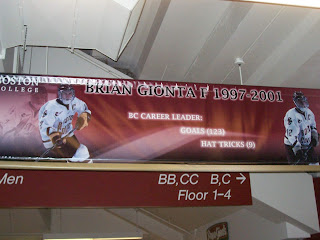 Brian Gionta (Boston College) has called it a career after 16 NHL campaigns.

A third-round draft choice of the New Jersey Devils in 1998, Gionta, 39, won a Stanley Cup with the Devils in 2003, and three years later set a still-standing franchise record with a career-high 48 regular-season goals to go along with a personal-best 89 points. The Rochester, N.Y. native went on to serve as captain of both the Montreal Canadiens and the Buffalo Sabres before finishing his career last spring with the Boston Bruins.

A four-time All-America selection and a three-time finalist for the Hobey Baker Memorial Award as the top player in NCAA Division I men’s hockey, Gionta skated for BC from 1997 to 2001, and is the school’s all-time leading goal scorer with 123 goals. He finished his collegiate career with 232 points in 164 games, which still ranks him second on the Heights’ all-time scoring scroll behind David Emma (239 points).

Gionta also helped the Eagles to four NCAA Frozen Fours, including the 2001 NCAA title, its first national championship in 52 years. He is also BC's all-time leader with nine career hat tricks. As a senior, he scored five goals on five shots in the opening period of a 7-2 win against Hockey East rival Maine, and then helped BC to its third Hockey East Tournament championship in four seasons, plus the 2001 Beanpot Tournament crown. He was also named the 2000-01 Hockey East Player of the Year, and shared the Walter Brown Award that same season with UNH goaltender Ty Conklin as the top American-born player(s) in the New England collegiate hockey ranks.

Gionta represented the United States in two Olympic Winter Games, in 2006 in Italy and in 2018 in South Korea. He served as Team USA's captain in the latter competition, and also played for the U.S. in two IIHF World Junior Championships and three IIHF World Championships. He will now serve as a development coach with the NHL’s Sabres. 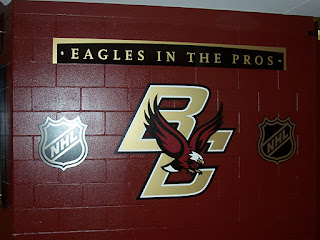 Miles Wood (Boston College) is back with the New Jersey Devils. Wood, 23, who sat out the first week of the Devils' 2018-19 training camp, signed a four-year, $11 million contract with New Jersey, according to NHL.com. The contract carries an annual average value of $2.75 million.

A Buffalo native, Wood set professional and NHL career highs last season when he tallied 19 goals and 13 assists for 32 points in 76 regular-season contests for the Devils. He also made his Stanley Cup Playoff debut, and went scoreless in five games as the Devils were eliminated in the first round by the Tampa Bay Lightning.

Wood prepped at the Noble and Greenough School, and with the Cape Cod Whalers and Salem Ice Dogs, all in Massachusetts, before he spent one season at BC. He tallied 10 goals and 35 points along with 76 penalty minutes in helping the Eagles to the 2016 NCAA Frozen Four, and then turned pro, where he made his NHL debut with New Jersey to close out the season.

He spent 15 games with Albany (AHL) during the 2016-17 campaign before joining the parent Devils for good, and collected eight goals and 17 points in 60 NHL appearances that season. The son of former NHL player and Yale University alumnus Randy Wood, the younger Wood has registered 27-22—49 points and 170 penalty minutes in 137 NHL regular-season contests. 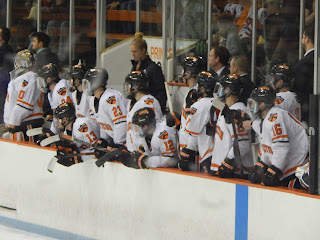 Three Princeton University seniors were named to the 2018-19 ECAC Hockey All-League Team, as reported on the league website.

Rounding out the preseason All-League Team was Yale University senior forward Joe Snively, Harvard University junior defenseman Adam Fox, and Cornell University sophomore goaltender Matthew Galajda. Cornell also topped both the preseason ECAC Hockey media and coaches polls as the projected top team in the conference for the upcoming campaign, while Princeton was tabbed for second place in both polls.
Posted by RJU at 8:44 PM No comments:

Remember the 11th of September 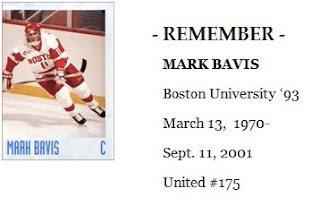 Boston College is always the last school to release it's Division I ice hockey schedules. Here's what the men's team should face this season (subject to change):