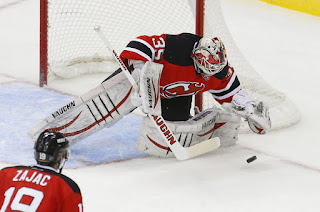 Former Union College goaltender Keith Kinkaid made his NHL debut last night, stopping 12 of 13 shots, including a Steven Stamkos breakaway, in relief in the New Jersey Devils 5-2 loss to the Tampa Bay Lightning.

Kinkaid, who wore No. 35 for the Devils, played the final 25:45 on Tuesday night at the Prudential Center in Newark, in relief of starter Johan Hedberg, and only allowed a goal by B.J. Crombeen with 1:20 remaining in regulation. The Farmingville, N.Y. stopped Stamkos 1:08 into the third period by extending his left pad to make the save. The Devils have lost six straight games.

Kinkaid, who went 37-18-6 in his two seasons with Union from 2009 to 2011, and backstopped the Dutchmen to the NCAA Tournament as a sophomore, was returned to Albany (AHL) today. Former University of Minnesota netminder Jeff Frazee was brought up to New Jersey in his place.
Posted by RJU at 10:11 AM